1.1 Previously there was no specific legislation or power for a Parish / Town Council to award Honorary Freeman. Advice in regard to honouring of citizens indicated that in the absence of express statutory power, it was considered that local councils could, nevertheless, admit to be honorary citizens of their parishes and communities persons who have served the public well over the years. Any expenditure incurred in connection being funded under the LGA Section 137 power to spend.

1.3 By virtue of Section 249(5) and (6) of the 1972 Act as amended, all local councils may now exercise powers to confer the title “Honorary Freeman” or “Honorary Freewoman” to persons of distinction and those who, in the Council’s opinion, have rendered eminent services to the councils area.

2.1 Section 249 (8) of the 1972 Act, as amended, provides that the admission of an Honorary Freeman or Honorary Freewoman must be by resolution made at a meeting of the full Council specifically convened for such purpose and passed by no less than two-thirds of the members of the Council.

2.2 Section 249 (8) also requires “notice of the object of the meeting” to be given. This confirms the need for the agenda with the public notice and summons to members in respect of the Council meeting to itemise a motion to confer the title of Honorary Freeman or Honorary Freewoman. Section 249 (9) of the 1972 Act as amended provides that a local council may spend a reasonable sum as it thinks fit for the purpose of presenting an address or a casket containing an address to a person or whom it has been conferred the honorary title.

3.1 A Town or Parish Council can award a ‘Title of Dignity’ to a person in recognition of significant contributions being made to the local community. Bellingham Parish Council may award the title of ‘Honorary Freeman of the Parish of Bellingham’.

3.2 In keeping with the special nature of the award it shall be strictly limited to residents from any walk of life who have made a very significant voluntary contribution to  Bellingham Parish and who have demonstrated “service above self”, or a significant national contribution relative to Bellingham Parish. It would be expected that the nominee will have given extensive and distinguished service to the community which transcends local government i.e. service to other organisations, voluntary and community groups, in a largely voluntary capacity and not usually simply for long service on the Parish Council. The nominee must have made an outstanding contribution to the Parish so as the nominee’s contribution can be demonstrably seen to stand head and shoulders above the contributions made by most other people.

3.3 The Parish Council’s decision on the award of the title is final and no discussion or correspondence will be entered into on the matter.

3.4 There is no limit to the number of nominations or holders of the title, but the nature of the nomination criteria means it is unlikely that the honour will be frequently awarded and will therefore remain distinctive. The award will be conferred for the life of the title holder but is not hereditary in nature.

3.6 All nominations of Honorary Freeman are to be treated in the strictest of confidence. The nominee should not be informed that they have been nominated as it is not fair to raise expectations in case they are not met. It is imperative that submissions are not discussed with any other persons. Any disclosure will make the application invalid.

3.7 Once a nomination has been received it will be considered by a meeting of the Full Council at the December meeting each year. This discussion will be held under ‘restricted business’ and will therefore exclude members of the public. The whole Council must  resolve by at least a two-thirds majority that the distinction of ‘Honorary Freeman of the Parish of Bellingham’ be conferred upon the nominee.

3.8 Following a recommendation by Full Council that an award is justified the title of ‘Honorary Freeman of the Parish of Bellingham’ will be granted by the Chairman of the Parish Council and the title holder presented with a scroll citing the grounds for the award. The presentation of a scroll would be made by the Chairman at a suitable appropriate event. A copy of the scroll will be held on record by the Parish Clerk. The title holder will be able to style themselves ‘Honorary Freeman of the Parish of Bellingham’. The title does not convey any legal or financial privileges on the holder.

Awarded Freeman of the Parish

The following people have been awarded the title of Honorary Freeman of the Parish of Bellingham. 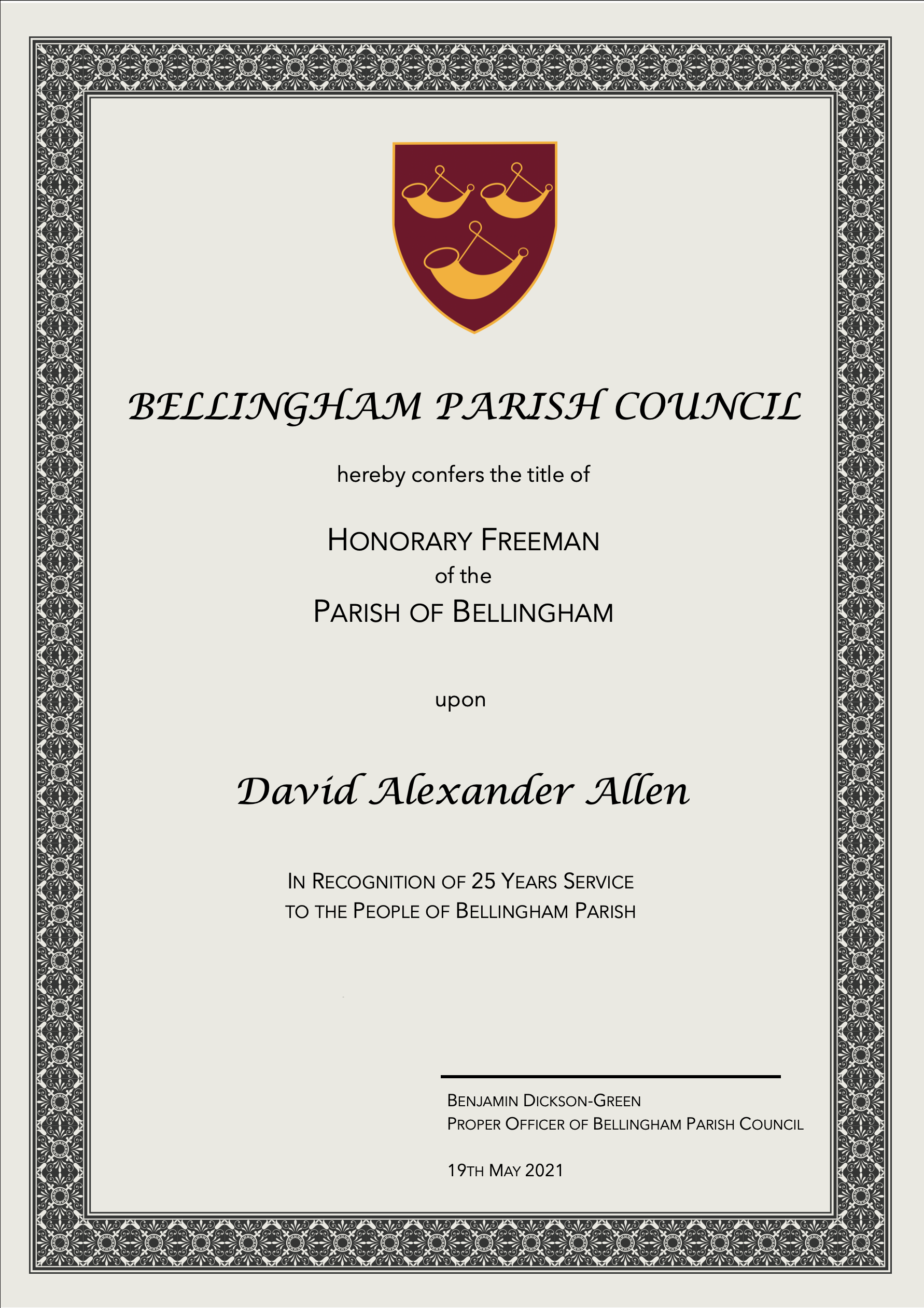 Bellingham Borderlands Place Programme - Your chance to have your say!Memorial Bench at Fountain TerraceJubilee Weekend - Are you a business planning an event?